A Rawhide Guide: Elizabeth Helvey Saddles Up to Lead the DAEC 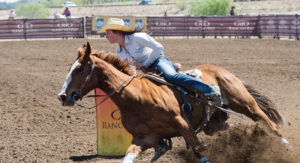 Elizabeth alternated between working the reins and gripping the saddle horn while the 800-pound horse beneath her buckled its body around an upright barrel. Clay soil clots spat out from the hooves as the horse charged through the tight turns in the cloverleaf pattern around two other barrels. Elizabeth drove her heels against the horse’s belly to communicate directions and urge more speed. Through a shimmering dust curtain, girl and horse bolted for the finish line.
“I grew up on a cattle ranch in Montana by the Wyoming border, so I grew up on horseback,” Elizabeth Helvey recalls.
Perhaps the only rodeo event she loved more than barrel racing was showing cattle. Someone once snapped a picture of her, aged 15 or 16, kitted out in full cowgirl regalia, showing a steer for 4-H. Just as the picture snapped, Elizabeth leaned forward. The result is a black and white image of a young girl seeming to sniff a bull’s business end.
Elizabeth laughs heartily remembering that picture. Her humility is evident. Indeed, it may have been her natural ability to never take herself too seriously which made her the most natural fit for the DAEC’s new Executive Director. Growing up in that rural outpost of the American west, Elizabeth learned that the image of the loner cowboy was false. Where she came from, everyone helped everyone.
“We’d help each other with branding. We’d help each other with roundup in the fall. We’d work together to get the school open. We were too rural to have any county or state resources,” Elizabeth notes. She eventually took hold of a core belief—call it a rawhide guide to life. As she puts it, “We are stronger when we are more connected.”
But the interconnectedness of that community came under threat when mining companies bought out many of the area’s ranches. The population swiftly divided into the “haves” and the “have nots.” Some families experienced internal strife as they debated whether to sell or keep their land. For a time, arguments, grudges, and resentments frayed the community.
As a result, Elizabeth carried into adulthood an unshakable fascination for community systems and social negotiation. Her higher education included specialties in economics and urban planning.
“I get so excited trying to figure out how to take a system that works in one area and make it work in another area,” she says. Then she laughs, “Gosh that sounds so nerdy! But it spurs creativity and creative problem solving.”
For the next 25 years, Elizabeth delved deeply into creative problem solving when she took a job dealing with what she describes as “intergovernmental relations.” Essentially, the private company she worked for advised the U.S. Department of Energy whenever it needed to transport radioactive materials. The deeper the concerns for public safety, the more likely tempers were to flare. Elizabeth was, therefore, tasked with aligning the interests, legalities, and actions of federal, state, and tribal governments.
Six years ago, her husband’s job with the State of Colorado transferred the family—including a son, a daughter, and Osito the dog—to Durango. Elizabeth reveled in both the outdoor delights and she dipped a toe in nonprofit volunteerism. After a while, her innate curiosity for complex systems fixated on her local community and its place within a larger, more complex economic web. About the time she began to wonder what else she might do with her vast talents, the DAEC’s job posting appeared.

“When I was looking at the organization, thinking about whether I would apply, I found the statement of beliefs on the website,” Elizabeth explains. “And the very first one is: We believe in the inherent value of every individual. I didn’t need to read further than that! Any organization that puts that forward is the one I want to work for!”
That core tenet resounding at the heart of the DAEC echoed Elizabeth’s upbringing. She knew she’d found her home away from home.
She has since used the quiet summer months to ease into the saddle. Day by day, she feels the reins more securely in her grip, but she feels no desire to pull up and halt momentum. She believes her predecessor, Teresa Malone, left behind a supremely strong organization. With that kind of foundation in place, Elizabeth wants to apply her skills where they will matter most in the distant and not-so-distant future.
“I just see big challenges ahead for the nonprofit world,” Elizabeth asserts. She points to tight economic situations facing county and state governments. She notes that the overall government sector is waning as a funding source. “We’re going to have to be creative to stay ahead of the curve.”
To that end, Elizabeth is eager to investigate how the DAEC might partner with other nonprofits, the wider community, as well as the private sector. How might she wrangle together complex systems and divergent interests in order to benefit her community over the long haul? No matter what the future holds, Elizabeth is unafraid to take the bull by the horns (or sniff its backside) because her lifelong values guide the way.
As she puts it, “The more we can integrate people into our community, the more we can be supportive of each other, then the stronger we’ll all be.”