Dreams, Best If Used By

Do dreams come with expiration dates? When should you rule out a goal as out of reach or impossible?

Ed Lettman was days away from high school graduation when the principal expelled him. The offense?

“Fraternizing,” Lettman alludes with his characteristic wry chuckle. He points out the 1970s were different times for young men and women.

Lettman, now 62, worked his whole life without a diploma. However, like millions of his Baby Boomer peers, he discovered the modern work environment increasingly difficult to navigate without school credentials.

“In the past, I never had trouble getting a job. [Employers] always required work or experience,” Lettman explains. “I never needed the diploma, but in today’s world, it is very important.”

Last year, the DAEC expanded its high-achieving  HSE (High School Equivalency) and ESL (English as a Second Language) programs to Montezuma County in response to public requests. According to US Census data from Montezuma County, more than one in four adults either lacks a high school education or speaks English less than very well. That is just over one quarter of the adult population.

Lettman is the Center’s first student to graduate from the satellite site after completing his coursework and passing his HiSET exams. The HiSET (High School Equivalency Test) is one of three assessment alternatives available in Colorado, besides the TASC (Test Assessing Secondary Completion) and the widely known GED, or General Education Diploma.

Despite surviving a nearly fatal head injury almost thirty years ago and dealing with the resulting chronic pain and reconstructive surgeries, Lettman doubted he could survive in a modern classroom.

“Oh man! Those ladies made me really stir my gray matter,” he says. According to Lettman, the courses advanced his skill levels in most subjects from a tenth-grade level to college-ready. He credits his success to his teachers and their patient approach to lessons. “The classes helped me considerably.”

“Ed is the type of student a teacher looks forward to seeing in class every day,” reports his teacher, Colleen Brennan, whose 15 years of teaching has taken her cross-country and overseas. “Ed earned a high school equivalency for all the right reasons: to prove to himself that he could, to set an example for his grandchildren, and to continue a pursuit of lifelong learning.”

Every year, roughly 300 students, ranging in ages, seek the Center’s services. An innovative curriculum enables instructors to provide targeted learning across a broad spectrum of learning abilities. As a result, the DAEC’s graduation rate exceeds both state and nationwide rates. For example, in 2016, 96% of DAEC students passed the GED compared to 87% across Colorado and 80% across the US.

With that same model expanded to Cortez, a wider swath of southwest Colorado is poised to enjoy the positive, multi-faceted stimuli resulting from adult education, including higher earnings, a fortified tax base, reduced strain on public support/assistance services, as well as reduced crime and criminal recidivism, which, in turn, reduce state and local incarceration expenses.

As the newest graduate, Lettman embodies the best by-product of adult education, a branch of learning tied to the notion that it is never too late to nurture learning, curiosity, and determination. 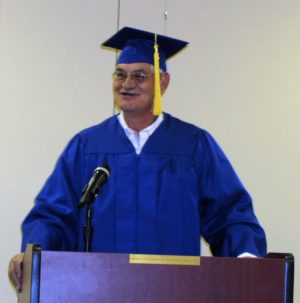 “This is an amazing feat for me,” he reflects.
For more information about classes at our Cortez Adult Education Center, call 564.7004.