The Daisy Chain of Events

Daisy T. pressed the button to summon the elevator. She waited. And…waited. It was an old elevator in an old building.

She’d just been to an appointment with the SASO, Sexual Assault Services Organization. She was tired and emotionally worn out.

The DAEC’s kitchen is a popular hangout.

Still waiting for the old elevator, Daisy glanced over her shoulder and idly read the various fliers on the walls. In a nearby office kitchen the aromas of warm food coiled through the hallway. Always a fan of food, Daisy turned to investigate. Evidently some business called the Durango Adult Education Center was serving up a hot, delicious lunch.

Adult education? Daisy mused. Must be another one of those places where you get your GED.

More accurately, she frowned, one of those places where she’d tried and failed; where the so-called instructors gave her long assignment lists and no instruction; where they shamed her for dropping out of high school.

Then a different inner voice declared, “You need this, Daisy. You need this right now. You better go check it out. See what’s there.”

Ding! The elevator chimed as its doors slid open. Daisy did not notice. She was already asking questions inside the DAEC.

When she left a while later, she was registered for classes. And despite feeling an overwhelming welcoming energy from everyone who worked at the Center, Daisy still thought, “Well, let’s see how long I last here.”

Past experiences were enough evidence to suggest that the odds of succeeding were not in her favor. Rather like an actual daisy which is a composite of two flowers, Daisy was a combination of two identities. Everyone she knew saw her as a boy. She even had a boy’s name.

“I never felt as a boy,” she explains. Instead, she was captive inside the wrong body. Facing a mirror was always a shock because she’d see a masculine exterior.

Simply recall a time when, after several hours, you forgot you were wearing a Halloween costume and face paint. The jolt you felt upon seeing your altered identity reflected back is a small semblance of Daisy’s lived experience.

Transgender individuals like Daisy face immense violence and discrimination (which is why her full name is omitted here). According to the U.S. Department of Justice’s Office for Victims of Crime, one in two trans individuals experiences sexual assault. In a 2015 survey, the National Center for Transgender Equality reported 96% of participants experienced violence because of their gender identity. About one third of the transgender population lives in poverty with little hope for secure employment.

Because a high school diploma grants access to higher education and steadier employment, trans-youth who are prevented from finishing secondary school are way more likely to experience even greater rates of violence, sexual assault, homelessness, and poverty.

Daisy had been on the cusp of graduating high school. She’d just purchased her cap and gown when a counselor took her aside and said she was missing a credit. She would not be allowed to participate in graduation.

“That was very disturbing and heartbreaking to me,” Daisy says. How was the error not discovered and fixed sooner? She knew the counselors well. She visited them often throughout every school year.

Nonetheless, she was so shocked and ashamed, she dropped out. She moved far away from her community, rather than have to face any rumors and all the I-told-you-so’s her family seemed to keep in their back pockets. “A lot of my family are like: you’re gonna fail,” Daisy explains.

As the statistics predicted, the next seventeen years of Daisy’s life were harsh. However, everything shifted dramatically after she discovered the DAEC. “I have to say the Center there is the best place I’ve gone through. Even better than my high school. The environment and the people there are so friendly. They’re there for you to succeed. You have all the tools there. You have all the support. You have all the love.” Daisy says. 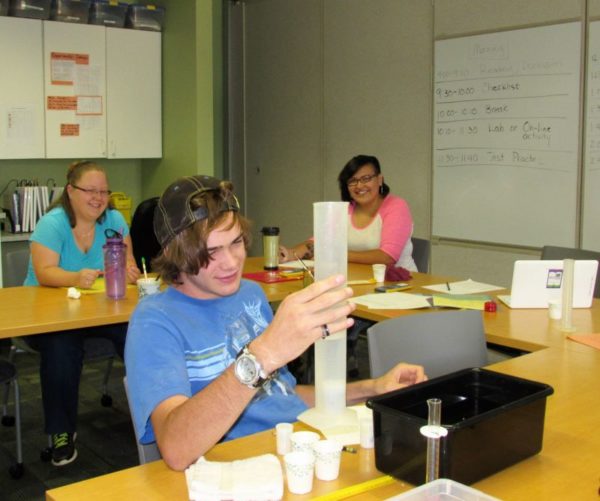 Classes are always engaging and interactive.

She goes on, raving about the teachers, “Mary is great! I love Mary! Oh and Cyd! I love her personality. They’re interactive. They’re very engaging. They’re concerned. They really want you to get this. I literally love all the staff there. Literally everybody there was like so encouraging and so motivating. They were so empowering to say: you can do this!”

In fact, Daisy was in the DAEC lobby when she happened to have what would be one of the most transformational conversations of her life. She was waiting to be seated for one of four subject exams needed to officially attain her GED when Executive Director Susan Hakanson passed through en route to the kitchen.

Susan wished Daisy luck and then the two chatted about future options beyond the tests. Was Daisy considering college?

“My fear with college,” Daisy says, “was like: College? I’m old. You know…like…I’m oooolllddd! I can’t do college, girrrl!”

Susan reassured Daisy that college was definitely an option for anyone at any age. She herself attained all her advanced degrees later in life. She also had a network of friends who had done the same. Susan arranged for Daisy to hear from several of these inspiring individuals.

When the DAEC arranged its usual college tours, Daisy readily participated. She teamed up with the Center’s Career Advisor, Danielle Beamer. Together, they tackled applications, admission essays, and financial aid paperwork.

After registering at the DAEC in 2018, Daisy graduated with her GED in early 2019 despite COVID-19 interruptions, lockdowns, and restrictions. Just a few months later, she attended her first college classes at Fort Lewis College.

“I’m really leaning towards majoring in psychology because I feel like, girl, I’ve been through so much in life. So much!” Daisy says. “My idea was I wanted to give other people support and hope. I wanna be someone who says: you got this! Trust me, you can do this.” 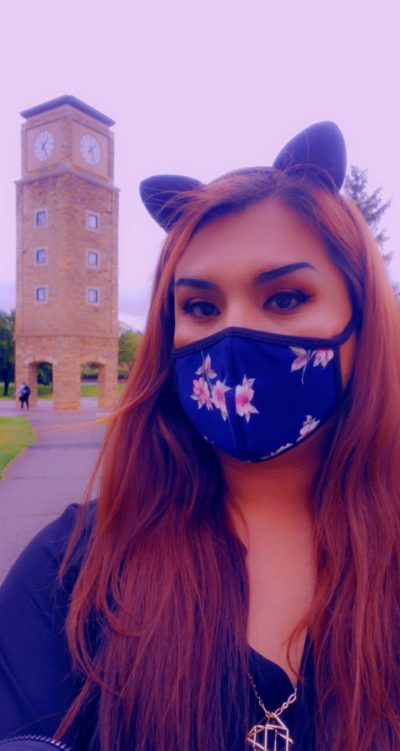 Daisy T. sees her true self.

When she’s not reading assignments, writing responses, or prepping for quizzes, Daisy enjoys taking selfies in front of FLC’s iconic bell tower. Far from any kind of self-obsessed narcissism, these digital self-portraits reflect the real person Daisy has always longed to see staring back from a mirror.

“Before, I could never see myself doing this,” Daisy says. “I’m very grateful that…” she pauses as tears well up. Then she laughs, “Gosh! I’m getting emotional again!”  She starts again, “I feel like I’ve been given my life. A different life. A better one. And I don’t think I could have done that without the Center and everybody there.”

To any person wondering if they, too, should go back and get their GED, Daisy advises, “Look at my before picture. Look at my after picture. Everybody has their time and their moment. If you’ve stumbled upon the [DAEC’s] website or you searched for it, then you’re in the right place at the right time. You’re leaning towards it, so why fight it? Don’t be afraid of it. Go for it!”

Daisy slides her books and spiral notebooks into her backpack. She has a lecture class starting soon. She almost giggles when she admits, “I’ve never been so excited for the day. So excited to go to school.”

Interestingly, the word daisy stems back to Old English words for “day’s eye” because every morning, the petals unfold to reveal its sunny center. Sounding rather like an actual daisy flower, Daisy rejoices, “I’ve never been so happy to wake up.”