For the second time in her life, Meliana Bory received an invitation to radically shift her life. Her English-as-Second Language (ESL) teachers at the Durango Adult Education Center suggested she enroll in a newly created language class. 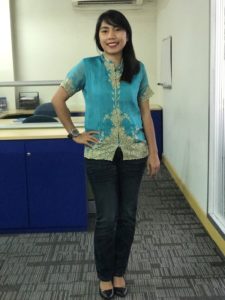 Meliana, or Meli, was a former journalist from Makassar, Indonesia. She had a keen ability to sniff out promising leads. This new ESL class smelled like a not-to-be-missed opportunity.

She arrived in Durango in August 2018. She had a B.S. in Industrial Engineering, a 7-year stint as a journalist, plus a successful career with a telecommunications company. She advanced from public relations to sales, or “corporate communications.” Unfortunately, she lacked English. In the U.S., the gifted and vivacious communicator was suddenly cut off from the world she inhabited. Meli could not speak to anyone. Not cashiers at the grocery store. Not customer service reps on the phone. Not even neighbors.

Luckily, Meli discovered the DAEC. In November, she enrolled in an ESL class. “The first time, I am nervous with the classmates. I feel like they look at me and see my English is not good,” Meli says.

Her worries were needless. She excelled. She also added a specialized pronunciation class to her schedule. Meli notes, “After that one day, I let [fear] go. The teachers, Christina and Sara, they are so good!”

Within a few months, Meli had the confidence to navigate around town independently. She did not shy away from conversations with native English speakers. Now, her teachers were encouraging her to take an English for the Workplace class, more technically known as Integrated English Literacy and Civics Education (IEL/CE). It was highly specialized and designed to walk its students up a career ladder.

She knew from personal experience that seemingly small choices led to radical changes. After all, a small, seemingly insignificant choice ultimately catapulted her out of Indonesia. Saying yes to a simple invitation swayed her destiny.

That invite was to a dinner party. A friend’s friend was hosting a get-together to welcome home a fellow Indonesian who had married an American and returned with husband and American guests in tow. These exotic tourists ventured all the way from a far-away land called Colorado.

Meli fretted over etiquette. She did not personally know the hostess; she dreaded being a party crasher. “My friend said it is okay. But I am…shy. And my English not good,” she says. She had learned some English years ago in middle school. How could she possibly chat up the American guests?

Despite her reservations, Meli went. She met terrific people. In particular, a young man from Durango. She recalls, “I met him and I thought: that will be my destiny.”

The Durangoan asked if they could keep in touch online. Months later, he asked if he could return to Sulawesi Island and continue getting to know her. Soon after that, he asked if she would marry him.

An Indonesian wedding might feel familiar to an American. There’s the usual white dress, church service, and the dearly beloved gathered. The reception, however, turns the familiar on its head. “We celebrate the reception with our traditional culture,” Meli beams. Bride and groom don colorful garments. They sit on spectacular thrones and watch dancers groove in ornate costumes.

Meliana’s Traditional Indonesian Wedding–The wedding ceremonies were held in Makassar in Toraja style. Toraja is an ancestral cultural style typical of that region.

A year after the wedding, however, life in the remote mountainous West of the United States turned normal on its head for Meli. Gone was the bustling, glittering capital city on the tropical island paradise.  “17,000 islands we have in Indonesia,” she explains. “Oh so different! We live more on the beach. Our weather is tropical there. We have two seasons: dry and rain. That’s it! It’s hot. Even [in] rain, it’s hot.”

Not only was Meli removed from her parents, brother, and three sisters, but also from the beloved flavors and scents of home. “Oh the food!” she gushes. “Because we live near the sea, the seafood is so fresh.”

While the local food choices might have fallen short, the ESL classes surpassed all her expectations. They freed Meli from a depressing isolation. Buoyed by her success, she enrolled in the English for the Workplace class.

According to a brief from a Department of Education organization, 25.3 million people in the U.S. lack proficient English skills. Whether they have a bare-bones education or have advanced degrees, many of these individuals are corralled into low-wage, low-skill jobs. To correct that problem, the Obama White House launched the Workforce Innovation and Opportunity Act in 2014. The Act aimed to bolster literacy programs while encouraging adult learning centers to partner with employers and create career pathways for English language learners. Thus was born the IEL/CE class.

A typical ESL class equips adult learners with the language acquisition essential to home life and community participation. The IEL/CE class offers the technical language and culture lessons students need to excel in a particular career.

The DAEC tapped ESL instructor Michelle Hall to devise and deploy the inaugural IEL/CE class. She notes the class is intended for a particular ESL student, “Maybe they’re just working at a restaurant or maybe they’re cleaning houses or they may have degrees from their home country…and they also have a desire to get into a new position or new job where they’re making good money or have a job they enjoy.”

Hall also points out that the course’s objectives are clear-cut. “Our goal is we get these people actually into a job.” The goal naturally aligns with the DAEC’s longstanding mission to fill in educational gaps so that students attain economic and societal mobility through living-wage employment. As Hall puts it, “[Our students] have skills and they’re coming in with skills. How do we get them into the community into a training program so they can do more? Make more money. Have more job security. Get insurance and benefits.”

Advancing on any career ladder is no easy task. The difficulty increases when language is a barrier. ESL students must acquire the technical vocabulary essential for written and verbal communication in their industry. They also need to develop academic listening skills which help them identify main ideas and key concepts in a college lecture.

A couple months into the new curriculum, Meli raves about the course content. “I like English for work because it [makes] me more open how to work in the U.S. Of course it is different than how I work in Indonesia.”

In the opening weeks of class, Hall explored the often-overlooked but oh-so-vital “soft-skills” which are a vital factor in workforce preparation. Hall says, “A lot of that is conflict resolution, self-management, problem solving, and cultural norms in the United States. What does it look like to be part of an office or work team? What are the expectations—socially, verbally, dress code, body language?”

Meli discovered the lessons from the conflict resolution module could serve her in the workplace, as well as in her marriage. For instance, many of the disagreements she and her husband have result from mere cultural misunderstandings that are now more easily soothed.

The five students currently enrolled in the English for the Workplace class represent a diverse mix of professional ambition. Some plan to pursue nursing, early childhood education, or teaching. Meli aims for business administration. In August 2020, she plans to enroll in Pueblo Community College. At that point, the heavy cogworks of the IEL/CE course will click into place.

As Hall explains, once students are in a training or degree-granting program, “They can use me as supplemental help so they can contextualize the language. And then whatever they are working on in school, they bring here to class and I can help them with language support. It’s really about helping them navigate that course [or training] with supported English.”

In large cities, successful IEL/CE programs provide tandem teaching classrooms. One teacher covers the technical, industry content while the other supplies immediate English support. Being in a smaller, regional setting enables the DAEC to take a nimble and tailored approach. Hall can customize which community partners the program taps for building pathways into viable professional arenas. She can also personalize the course content. She plans to bring in lots of guest speakers who can offer sobering facts about an industry alongside inspiring success stories from other ESL students who have attained career advancement.

“We’re right at the beginning of something that will be really great,” Hall attests.

Meli agrees. “I always say if you want more practice, get more pronunciation or English grammar, you just go to Durango Adult [Education]. They [are] so helpful. Really so helpful.”

And as her small choices now begin to accumulate into massive changes down the road, Meli realizes she no longer has to wait for any invitations. She is directing the course of her own destiny because, as she puts it, “I’m more brave now.”