This is a story about a dad, his family, and a secret. It’s a true story. The dad in question: Trevor Gallegos. His secret was very old and painful. His wife was the only other person who knew. His four children—ages 9, 5, 3, and 1—were in the dark.

“I’ve always been kind of shameful about never finishing my education,” Trevor confesses. “I was always good at school but the turn of events…” he trails off.

Trevor grew up in Towaoc, Colorado, just outside of Cortez. In the 10th grade, when most students were stressing about learner’s permits to drive or being asked to prom, he had to find work and support himself entirely.

“It got to be too much trying to work in the evenings, trying to figure out rent and food. I ended up having to stop going to high school,” he says.

Time passed. Trevor worked as a wildlife firefighter. Then, for the last seven years, he excelled as a carpenter for a construction company. In any occupation, the long hours, low pay, and rolling layoffs take their toll.

Trevor notes, “I came to the conclusion: you’re never gonna get better pay if you don’t start with a better education.”

He shared his frustrations with his wife. She encouraged him to find and pursue whatever options might be available in their area. Through a Google search, Trevor found the Cortez Adult Education Center, a satellite center of the Durango Adult Education Center. He read about the GED classes, its mission, and its remarkable teachers.

To himself he resolved, “I’m gonna go back to school. It’s the best thing really. To get a better job. Better pay. To get treated better, actually.” 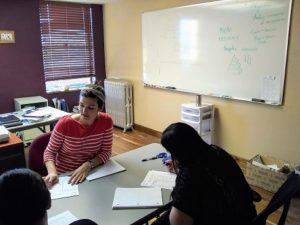 Gretchen teaching in her class

“Trevor was an exemplary student,” reports Gretchen Cowan, science and math teacher at the Center. “He was prompt and polite and proactive. When he had down time he would find a way to add to what he was studying in class. He was genuinely curious and engaged. He took what we offered and made it a very efficient education.”

“I was ambitious,” Trevor agrees. “I wanted to finish a long time ago.”

Small class sizes allowed Gretchen to work closely with Trevor. He benefited from the one-on-one learning environment. And all the while, he kept his studies hidden from his kids.

Early in her teaching career, Gretchen witnessed the powerful impact adult education could have on a family. By day, she was a student-teacher in a 6th grade classroom. After school, she worked as a tutor. One of her tutees was a woman attempting to obtain her GED, or General Education Diploma, which is equivalent to a high school diploma. Through a strange twist of fate, that woman’s daughter was in Gretchen’s 6th grade class.

“That experience,” Gretchen says, “brought the whole thing full circle for me—to see how a parent was striving to improve life for the whole family. And as far as I am concerned, it is much more difficult to get a GED rather than a high school diploma. You have to carve out the time and then study for and pass four rigorous tests. There is no getting by on extra credit or a lot of participation points. You have to know your stuff and perform at game time.” 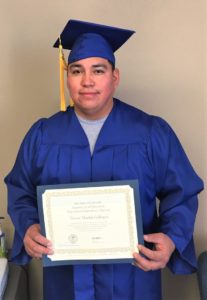 Trevor with his GED certificate

In December 2019, Trevor passed his fourth and final GED subject test. He says, “It felt really good to finish. I mean, it put a really big smile on my face.”

Ever ambitious, Trevor promptly enrolled at Pueblo Community College. His wife enrolled, too. They plan to pursue degrees in accounting.

When he shares the news with the CAEC, Gretchen celebrates. “We are so proud of our students!” she declares. “It’s always a vulnerable feeling to admit there is something you don’t have or something you don’t know. It’s brave to show up anyway and to stick it out despite that feeling.”

With his first round of college courses now underway, Trevor admits, “You know, it’s like a dream come true. I mean, I never ever thought I’d be [back in school] until I actually started doing it. If I put my mind to it, I can achieve.”

His newfound confidence seems to have softened the hard, painful edges surrounding his secret. He says, “One of these days, I will tell my oldest. If he’s having a hard time, I will tell him: a couple of years ago when you saw me working at papers and stuff, I was barely getting my GED. It’ll be a good story for him when he gets a little older.”

A very good story about a father who never gave up. A father whose children could always see him as a success. A dad who was always a hero.

For more information about the programs and services that the Cortez and Durango Adult Education Center offers, please visit: www.durangoadulted.org.

Save the Date: The New Colossus play  on February 25 & 26  @ FLC will be donating proceeds from the play to the Durango Adult Education Center.  For more information, visit: www.nfpdurango.org