When Crossing Rivers: Teresa Malone on Learning, Leading, and Leaving

The frigid river water gush-a-tumbled over and around the gray lump boulders. Rapid currents twisted and flexed like slick muscles.
“We have to cross here,” Teresa Malone announced to the twenty or so people—nearly every staff member and teacher from the Durango Adult Education Center—assembled on the shore during a daylong work retreat.She was right. No bridges or fallen trees connected the rocky banks and this was the shallowest section for many miles. It was the best place to cross if they ever wanted to reach the rented cabin stocked with food.

Malone divided the staff into groups of three. “Lean against each other like a tripod and coordinate your steps. Walk in unison and you’ll be fine.”
Her characteristic upbeat, confident tone left no room for doubt or rebuttal. The teachers and other staff members formed their tripods and began to shuffle through the acrobatic waters. “It’s freezing!” many shrieked and laughed. 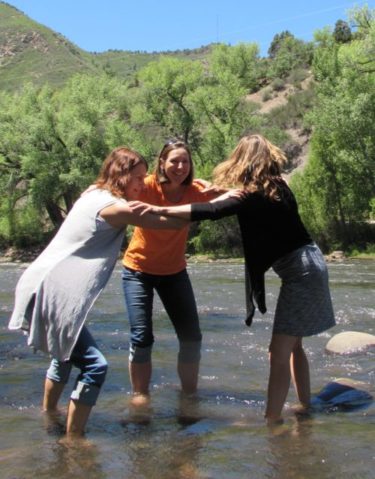 Teresa and staff forming a tripod to safely cross the river.

Because they trusted each other and trusted their leader, they navigated the obstacle with poise. That culture of trust became the norm at the DAEC when Malone assumed the helm as Executive Director in 2013. “My approach was: dive in head first, do my best, know that I’m going to make a few mistakes because I have to make quick decisions,” Malone confessed.

Luckily, her 25 years of nonprofit expertise stockpiled skills in grant writing, finance, as well as career and job training. Cultivating teamwork was also in her wheelhouse. Malone was the ideal candidate…mostly.
She did have one significant blind spot: almost zero experience in the adult education world.
“I knew I had a big learning curve,” she says.

Malone could have pretended to be an expert. Or, she could have hidden behind the “boss” shield, requiring the staff to know the nitty-gritty on her behalf. Instead, she became a student. She received fast-track tutorials and crash courses from her new colleagues at the DAEC. Malone credits the DAEC’s team for contributing so generously their boundless insights while she sat in on classes and asked the teachers and students lots of questions.
Instructor Mary Mullen reflected recently on her first impression of the new boss.

“I was struck by her humility,” Mullen said in a recent meeting with some of the DAEC’s board members.  Ask anyone on staff and they’ll tell you: Teresa stands out because of her smile, her warmth, and her we-got-this attitude—the very traits which bolstered the staff to ford a roiling river in the woods.
Perhaps not surprisingly, what began as a team effort to get the executive director up to speed blossomed into a whole new organizational structure for the DAEC.

Malone recalls that when she started, the programs were more compartmentalized. “There wasn’t this sense that a student could travel in between programs.”
For instance, many ESL students who needed to complete their education faced a complicated transition to the GED program. Malone and the staff worked to form seamless bridges—or maybe solid tripods.

“My thought was,” Malone explains, “when a student walks in the door it should not appear that we have multiple programs. Instead, we say ‘how can we help you?’ and then we guide them to the services they need. Everyone here works not for this or that program but for the student. And I think that shift has made us closer as a staff.”

The increased internal cohesion created the best kind of domino-effect; everything fell not into chaos but into place. The organization clarified its mission. It landed major grants. It expanded and enriched services not just across Durango, but to neighboring counties. Its teachers continued to win awards. It became the state model for best practices in creating and implementing adult education curricula. And most recently, it celebrated five GED graduates from the La Plata County Jail, 19 from the centers in Durango and Cortez, plus five new U.S. citizens. 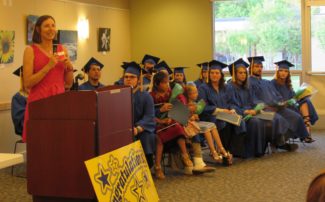 Teresa addressing her last GED graduation in May.

The abundant success makes Malone’s decision to depart from the DAEC not just saddening, but almost mystifying. Looking forward, Teresa is ready to ford a new river and take on a different challenge. She and the Board of Directors agree that the next executive director will need to have superb fundraising skills in order to support the organization’s ongoing growth.

All practicalities aside, the reality of leaving the DAEC plucks hard on Malone’s heartstrings. “It’s going to be hard, the last day I walk out of here…” Malone pauses to press a tissue to her eyes, “I’m going to miss the relationships. I’ll miss my team. I’ll miss having the students right here with their vulnerability and openness.” She goes on to explain how the students have taught her how to relinquish fear and judgment. They helped her see and feel beyond the superficial labels society too often places on individuals. “The students have taught me how to be a more compassionate human.”

In many ways, Malone has been one of DAEC’s best students. Five years ago, she demonstrated that same openness and vulnerability. She asked questions and persisted through tough times. Her reward was the trust she received from the entire organization.

Malone suspects trusting the next director, who will start on August 1, will secure the DAEC’s future. She points out, “It’s amazing when you think about it…how you can have this organization and you’ve got to trust someone you don’t even know to take over and make all these decisions and you have no idea what the outcomes will be. But it’ll work out because we have a really strong staff. We’ve got this great foundation.”